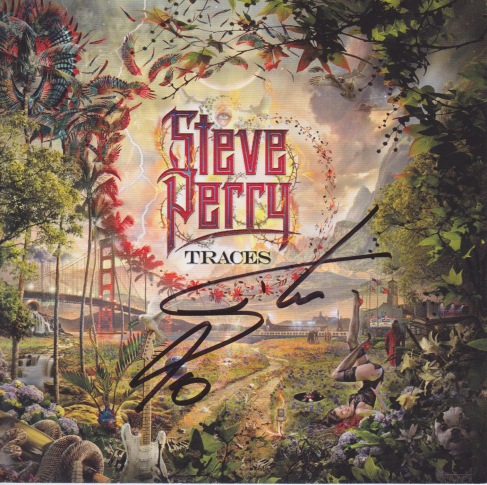 Have you ever waited a long time for one of your favorite recording artists to release new music? What’s the longest you’ve ever had to wait between album releases? Two years? Five years? For me and my fellow Steve Perry fans, the wait has been 24 years. That is not a typo! Steve Perry’s last album was released in 1994. Traces, which will officially be released Friday, is indeed his first new album in 24 years.

The day that the new album was announced and made available for preorder, I immediately placed my order for an autographed copy via his official online store. Today, two days earlier than the official release date, I received it in the mail and felt like a kid on Christmas when I opened the mailbox. I am thrilled to inform you that the album does not disappoint.

I could barely contain my excitement when Steve Perry showed up at last year’s Rock & Roll Hall of Fame induction ceremony. I cried just to see him standing on the same stage as the rest of his former Journey bandmates. Then he delivered an impassioned speech, but alas did not sing with the band. Was it because he couldn’t sing anymore? That was the fear of some fans, but I am thrilled to tell you that Steve’s voice is just fine. In fact, it’s way better than fine. It is still quite amazing.

When one of my favorite  artists releases a new album, I always listen to the album uninterrupted from front to back, in its entirety. That’s exactly what I did this afternoon when Traces arrived.  Steve’s voice is still powerful and soulful, capable of delivering highs and lows that even younger singers would struggle to hit. More importantly, you can still feel the emotion in his voice on every single track.

This album is primarily about love and loss, and the eternal struggle to move on and attempt to heal after losing someone you love. In the many interviews promoting Traces, Steve talked about the inspiration for this album, the love of his life, Dr. Kellie Nash. He lost her to breast cancer in 2012. He also explained why we had to wait 24 years for new music. The simple reason was that he was burned out and his heart was no longer in it. After Kellie’s passing, he felt the calling to make music again. The result is a beautiful, emotional collection of songs.

Rather than present a song-by-song examination or do an injustice to his work by trying to paraphrase Steve’s beautiful, heartfelt lyrics, I’d like to simply tell you that this album is great from start to finish and let you experience the magic on your own. It’s a beautiful, soulful journey that explores love and loss in a majestic way that only Steve Perry and his unique voice can. I’m sad that it took such heartbreak to bring Steve Perry back to music, but I’m also happy that he truly found the love of his life and that she was able to — in Steve’s own words — enable him to “have a complete heart.” Speaking further about the album he said, “Kellie taught me many things in our time together, but one of them was that it really is better to have loved and lost than to never have loved at all.” That, more than anything else, is the theme of Traces.

Above: The tracklist for the deluxe version of the Traces CD, which contains five bonus tracks not included on the standard version.